Apart from the film work, presenting, and TV appearances, Dexter has a fair bit of voice over work under his belt. He has been the voice for McDonald’s television adverts and (feigning a US accent) is the narrator of The Game audio book written by Neil Strauss. He also narrated the Five series Airforce Afghanistan.

So we come to what Dexter really wanted to talk to us about – his big project of the moment which is likely to jettison him into the archives as not only a great actor and superb voice artist, but as writer and director of a pretty awesome movie.

Yes folks – the child actor, with the awe-inspiring American accent, turned cockney geezer character actor for hire, …..has pulled it out of the bag. Huzzah!

Wild Bill is certainly funny, but also smacks with emotional impact and depth.

In fact Dexter’s directorial debut is a complete charmer with a very likeable central performance from Charlie Creed-Miles as ‘Wild’ Bill Hayward.

Released from prison after an eight-year sentence, Bill returns to a South London estate planning to stay out of trouble, serve out his parole and then head to Scotland. But he cannot easily escape his history with the dodgy geezers and dangerous drug dealers on the estate, or his obligations to fifteen-year-old Dean (Will Poulter) and his younger brother Jimmy (Sammy Williams).

So how will Dexter draw in the punters and manage to convince us that this isn’t just another London gangster sub-genre:

‘Lock, Stock was a fairly career-defining film for me. So of course if you say one of the guys from that film has done a film set in the East End, and there’s some snappy dialogue, it’s a bit funny, there’s some gangsters in it – well of course, the boxes are all ticked! But to a certain degree that actually helped me get the initial interest of getting the film made. I’ll admit I was kind of canny, exploitative even, in thinking ‘what’s gonna get me my opportunity to direct? What’s gonna get me that meeting?’ And I’m just lucky that the producers I got to read it saw what the bigger picture was and realised that yes, it is ticking those boxes but really we’re looking at a very different kind of thing here, and they still allowed me to pursue that. If I’d just said “I want to do a family drama about a father and son”, they would have just said “yeeah, right!”’

Nick, Andy Stanson, and Chris were all privy to the obvious excitement coming from Dexter as he chatted about the release of his film in the Green Room – and who can blame him – Wild Bill has already had rave reviews from tough critics and proves that Baby Face has finally become a critically acclaimed man!

Regular readers of the A1 VOX Blog may remember us having a very fun session with David Walliams. He visited A1 VOX having just completed his swim of the Thames and raising £1 million for Sport Relief.

The comic, turned charity hero, came into our humble studio to lend his voice to BT’s Speaking Clock. 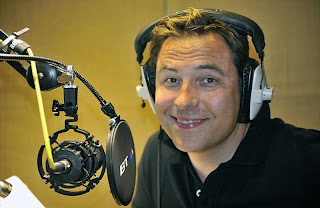 I can now tell you that this has gone live, and for the next five weeks David will join Chris Moyles, Girls Aloud singer Kimberley Walsh, Gary Barlow and presenter Fearne Cotton to give the nation the time of day.

All the above, (with the exception of Gary Barlow), recorded their pieces at A1 VOX the year before last and we feel proud to have done our bit towards the cause.

David said ‘I was relieved to hear that BT only wanted my voice this time around and not for me to take on another grueling challenge’.

So what can you do to help raise money – simply by ringing 123 from a BT landline until April 9th is what.

Callers can also take part in a daily prize draw to win a limited edition David Walliams clock and not a kerfuffle in sight.

The star added: ‘For the duration of the competition, every time you call to hear my dulcet tones, BT will donate 10p to Sport Relief 2012 – it’s as easy as 123.’